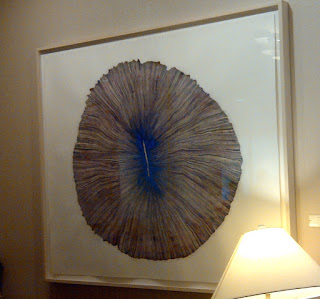 Went with my friend for her 3 month follow up with her oncologist today, & saw this picture hangin on the wall in the waiting area....and I'm sorry but I still can't stop laughin....heeheeheehee!!!!!!
Posted by LunaTechChick at 6:30 PM No comments:

It's Getting Better All The Time...

Yep...I have to admit....I'm doin better at these doctor appointments. Went to my mammo appointment.  And it was all good.  Six months from now I'll get both boobies mammo'd & then if that still looks good, then I'll get to go annual Diagnostic Mammos.  And I was very calm.  Ok, more sick with this stupid ass sinus infection to really even think about anything else.  Except this...since only one boobie was mammo'd, shouldn't that mammo be Half Price? Lol!

And yesterday's sonogram appointment wrapped up this latest flurry of doctors, scans, mammos & stuff.  And again I was calm...actually spent the whole time talkin to Dr D about what I could do to get rid of this damn sickness! Anyway....so the sono happened.  Tech & Dr D agreed everything looks "stable"....same as last time. And now I get a reprieve from medical stuff for a couple of months, until I get to see Dr W at my regular 3 month follow up at his new place in May.  I'm already on his books & everything.

So, I was successful in my New Year's Resolution....I did not show up at any appointment all freakin out & boo-hooin & stuff....not even a little bit.

And today, I think I can tell my sinus issues may be on the mend.  I hesitate to say that's gettin better all the time...cause that's what I thought for a day to two a week ago....so, started takin a new strong antibiotic yesterday (Tuesday)...we'll see.

And I think I'm gonna close this boring post here.  This blog, it appears, is one thing that is NOT gettin better all the time...lately.
Posted by LunaTechChick at 6:18 PM No comments:

Email ThisBlogThis!Share to TwitterShare to FacebookShare to Pinterest
Labels: boring

Yep.  I've had a bit of a  Freak Out.  Ok, more like a major melt down.  Sure did.  Monday, (the day AFTER the last blog was written, but same day most people saw it) I woke up with my gimpy left boobie lookin all red & inflamed.  Felt like heat was radiating out of it too.  And the redness was very well defined from the scar all the way around, encompassing the whole boob.  So yeah, I freaked out.  Naturally, my first thought was OMG, so now here we go with Inflammatory Breast Cancer??? OMGOMGOMG!!!!
But no.  Thankfully.  THANKFULLY NOT!!!  But, as a result of this little scare...I've already seen the surgeon, Dr V.  Kinda doin things backwards now.  Usually it's mammo first, then Dr V.  But with this little development, I kinda wanted to get it looked at ASAP.  So I got to see him yesterday.  Of course, when I got up yesterday, I could see the offending boob had gone totally back to normal, but went ahead with the appointment.  He took a look.  Doesn't see any problems.  Scar feels fine.  So you'd think that would give me a bit more confidence goin into my mammo tomorrow.  HA! Yeah, right!  Anyway, he said it's likely that steroid shot I got Sunday for my stupid upper respiratory issues may have caused it.  I learned that apparently, since I had radiation to that area, that skin & tissue will never again be "normal"...& can be affected by things that go into my body or possibly even some physical activity.  Between the shot & the hard core boom operatin I've been doin...appears that's what happened.  And this mornin, I'm happy to report, "Ol Lefty" continues to appear normal.
So, mammo tomorrow.  I'm still nervous.  But maybe not quite as much.  Thanks, Dr V!!! =)
Posted by LunaTechChick at 10:01 AM 2 comments:

Email ThisBlogThis!Share to TwitterShare to FacebookShare to Pinterest
Labels: freak out, mammogram, radiation

Three more medical visits to go.  The one I'm dreading the most is this Thursday.  The gimpy boob mammogram.  And I'm rememberin my New Year's Resolution to Remain Calm during all medical visits.  I've been successful so far.  Dunno bout the mammo though.  This, being a Diagnostic Mammo, the worst part isn't even the squashin.  Yeah, it hurts, especially on "Ol Lefty" there, but the WORST part is when I'm waitin by myself in the waiting area across from the mammo room while the technician takes it to the doctor to read. So far, after what feels like endless waiting, she always comes back & gives me a thumbs up.  I really do love this mammo tech.  I request this same one to do all my mammos. She's so nice & she will tell me stuff before she leaves me like, not to get all concerned if it seems like it's takin a long time, because there are a couple ahead of mine....little things like that.  And she also always gives me a hug after the thumbs up.  In fact, pretty much everyone on my medical team hugs me.  Love that.  I've heard that it's not very common....most doctors, especially docs in the cancer biz, tend to not wanna invest personally with the patients.  Yet, mine do with me.  And that's why my medical team is SO AWESOME!  Anyway....back to Paranoid....yeah...."Make a joke & I will sigh & you will laugh & I will cry".  Yeah.  Sounds like my mammo day. My poor O does his best to keep things light, make me laugh.  But I don't.  I SO don't.  Not till I get my thumbs up.  Really really gonna try not to cry all over my awesome mammo tech.  I didn't last time.  So hopefully won't this time.  Just puttin it out there that, I have this damn mammo on Thursday.  I'm scared of it.  Can't help it.

Also, I was told last time that so long as this mammo looks good, I'll be released to Annual Diagnostic Mammos.  BUT...then that would mean that by the time March 2013 rolls around, my right boob will have gone a year & a half between mammos.  Need to remember to ask about that....as much as I really really want to go to annuals, just wanna be careful.

Ok, so anyway....mammo on Thursday, lovely vagi-sonogram next week....then meet with my surgeon, Dr V.  Even though I'll already know the mammo results, I'm still nervous bout seein him too cause he does his own exam which includes lymph node feelin under the arms.  AND the fact that I was told my boobies are dense, lookin for cancer in there with a mammo is like lookin for a snowball in a snow drift.  So then there's that.  And after I survive these last three appointments,  I get a whole month off from doctors before I get to see my Oncologist, Dr W at his new place.

What else....I also wonder about the amount of radiation exposure I get during these medical flurries....chest x-ray, then mammo, then sono....all within just weeks of each other.  *Starts list of Questions for docs*

Now, enough cancer chat.  I have had a bit of a week from hell.  Took two...TWO pretty good hits to the head....two days in a row I hit my head, or my head was hit.  First, I basically stood up into the corner of a cabinet in the kitchen while cleanin.  Yeah.  Was stupid. Hurt like a bitch!  Then, the next day was SO windy.  And I was puttin some groceries in the trunk, when the wind blew the damn trunk lid down on my head.  I had been afraid of that, so I had been holdin it up with 1 hand, loadin with the other.  But I needed both hands for just a quick second & of course!  Boom, right on top of my head.  Also hurt like a bitch.  But apparently I have a pretty hard head....and lumpy  at the moment.  And in the future, if I must go to the store on a crazy windy day...I will park so that the wind blows toward the inside of the trunk, keepin the lid UP.  Will be tough to close, but better than gettin that hard knock on the head bone.

Our movie shootin is movin right along, but not without problems from the weather.  Every damn time we've scheduled outdoor shoots, it effin rains.  And gets freezin ass cold.  Like what happened this past Saturday.  This wasn't just a rainy day.  This was an all out, downpourin monsoon of a day.  We're like REALLY??  We must use Saturdays as our major shoot days. And then Sundays (a day we can't use), is always warm & sunny & perfect outdoor shootin weather.  REALLY??

And I couldn't even go to the shoot cause I'm dealin with my spring round of upper respiratory infection.  With a super painful sore throat.  Saw Dr C Thursday, but had to go back to a Doc In The Box & get a steroid shot today.  Really wish I had remembered to ask Dr C for one Thursday.  I'd have been well enough to do the shoot.  But Nooooooooooo....*shakes fist at chemo brain*

And guess what the weather is sayin about this comin up Saturday.  Yep.  Effin rain is possible.

Posted by LunaTechChick at 12:07 AM No comments: