I'm Super! Thanks For Asking! 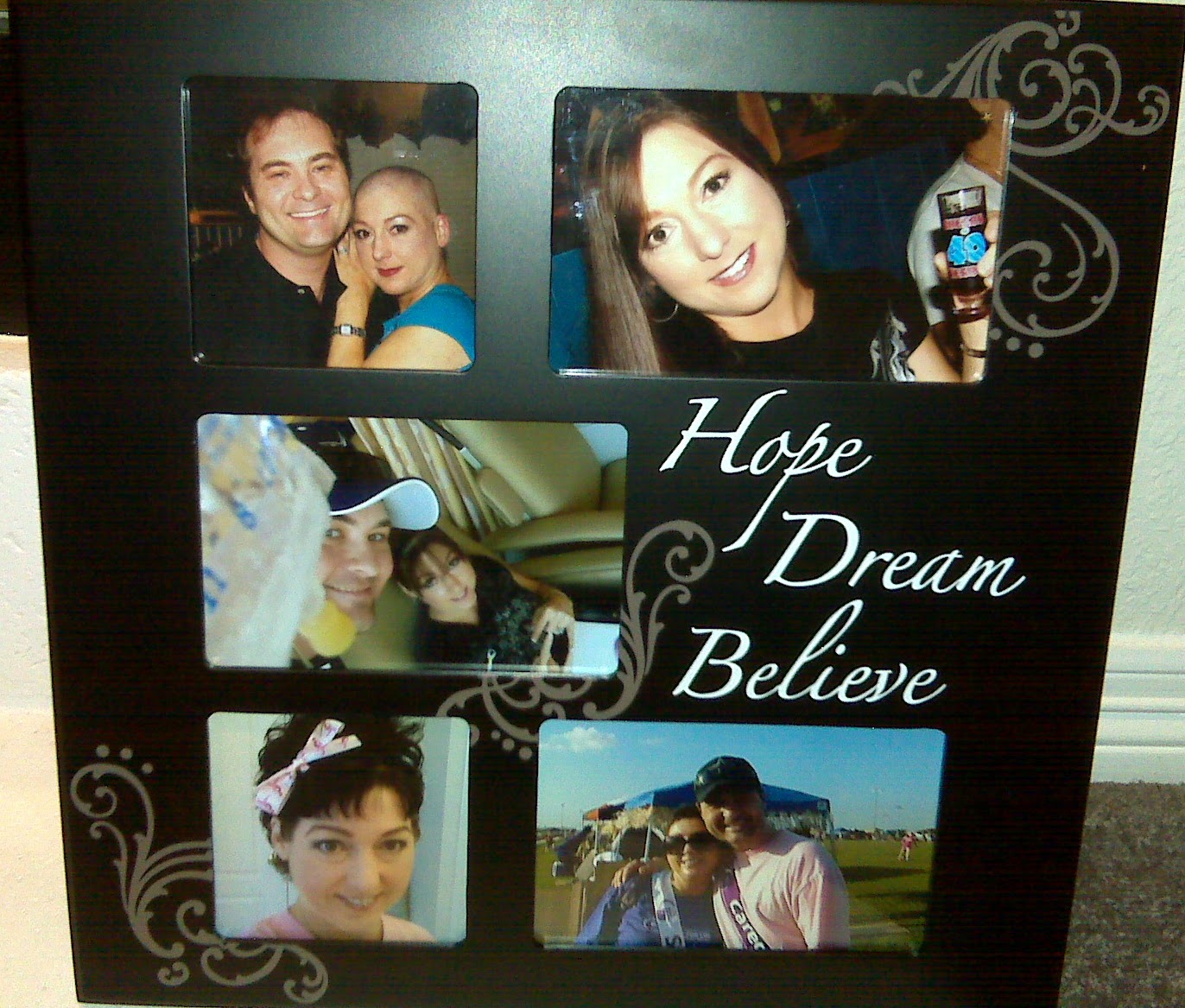 I used to do breast cancer so much differently.  In 2009, once I was able to stop crying and pull my shit together after getting the diagnosis, I had made up my mind that I was "tougher and WAY cooler than any stupid infiltrating ductal carcinoma", stage 3a.  And I put on my pink stuff and told any and everybody who would listen that I "HAD bc.  Past tense".  And that I have "already beaten it, cause my scans are clear!"

Oh how naive.  How naive and how unprepared I was. 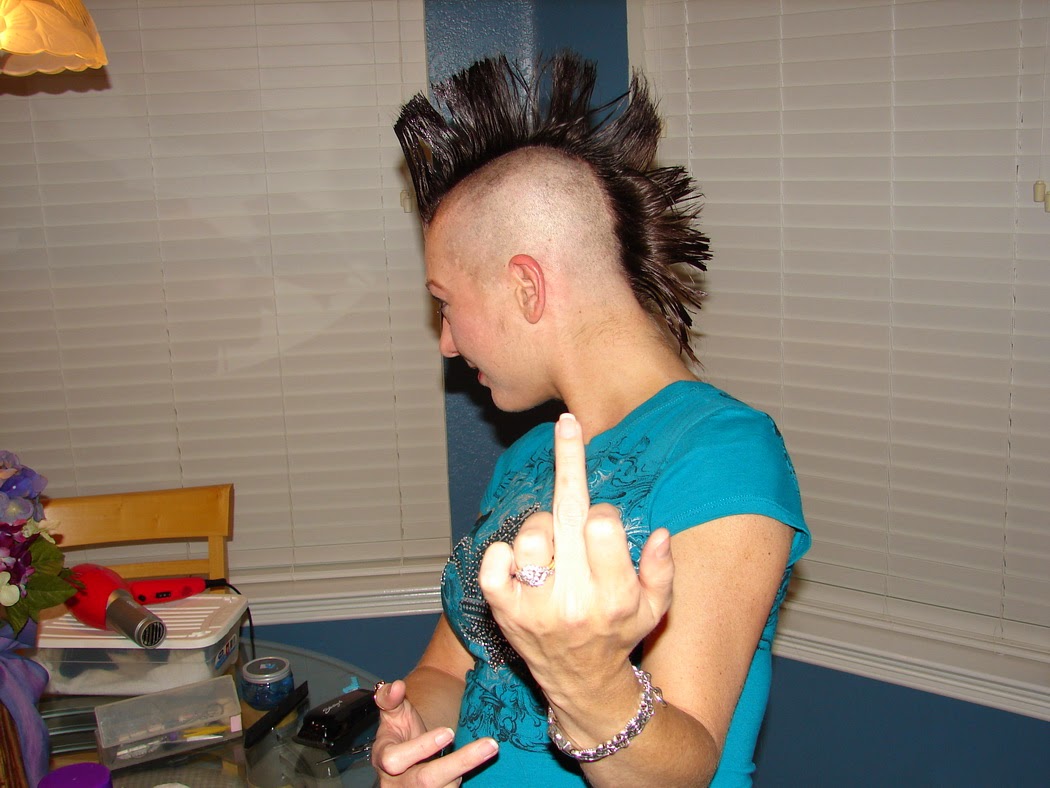 And for a couple of years, when someone would see me out and about, they would ask "How are you doing? How are you feeling?"  And regardless of how I was actually doing or feeling at the time, I would chirp "I'm GREAT! I'm kickin cancer's ass!" *Hug* "Thanks for asking! How are YOU?" And then sometimes the convo would go on about what was going on treatment wise, which I would riddle with jokes and sarcastic comments, sort of giving the finger to bc.  I tried to be as humorous as possible and appear to be the most courageous, bad ass, cancer ass kicker anyone had ever seen.

At least half of the time back then, if I had answered truthfully, I would have said that I was really terrified of the surgeries pending.  Or that I was totally upset that I'm bald.  And it wasn't until active treatment ended that it occurred to me that, bc people are never, ever really out of the woods. And I spent a good 2 years in a state of complete panic over the possibility of recurrence, or mets.  So during that time, if I had been honest, I would have expressed those thoughts, rather than "I'm great! *Insert # of years* cancer free (?!) and still kickin!"

Why did I do this?

Because I didn't (still don't) think some people want to hear the horror story that is the new normal for a bc person.  And I'm pretty sure that if I had been 100% honest with everyone, all the time, some people would probably stop asking about how I am. Maybe even go the other way when they see me coming...

I think it's because it makes people sad, or fearful when they hear someone with bc not doing the whole Pink *Rah Rah, I'm a Warrior! I Fight Like A Girl! I kick cancer's ass!*  stuff and then they just think that you're not doing it right.  You're supposed to be wearing a pink tutu and boa and shouting "C'mon cancer! Bring it on! I got this!"

Whatever.  I can't do that shit anymore.  Haven't been able to in awhile.

And here's another reason why...Honestly, some people don't know me well enough for me to have even wanted to be all full disclosure with them. But I no longer "chirp" the pink party line.  Just can't do it.

So if I do say "I'm SUPER! Thanks for asking!", I actually mean it.

Posted by LunaTechChick at 11:25 AM 6 comments:

When a celebrity gets breast cancer....

Some celebs, who go through treatment in the public eye, make it look so easy... Which is easier to do with a team of stylists, perfect lighting, the money and the stuff that money can buy (personal trainers, chefs, etc)... Just wanted to put my thoughts about that out there.

I've been thinking about this topic for awhile.  Every time a celebrity gets bc, and then goes public about it, it brings lots of attention and opinion. I remember back when the whole Angelina Jolie thing broke.  I said my piece about it on my Facebook page and was totally flamed by other bc people, trying to educate me. Some didn't even appear to realize that I'm a bc person myself.  So it is with great trepidation that I dare to go there again...

But here I go.

This popped up in my news feed this week. 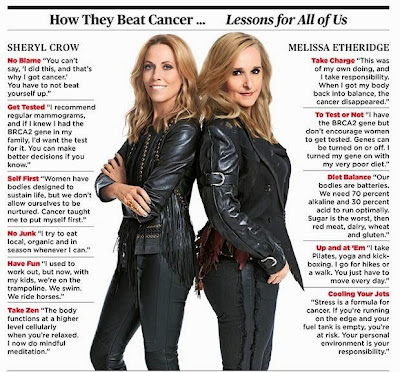 It's attached to an article from AARP.

For whatever reason, these two are now gonna teach us all lessons in beating cancer, and even curing or preventing it??  Really? They are now, not just singers, but also medical doctors?

Looking at the above picture, I see their first couple of comments seem to contradict each other.... SC says "You don't say 'I did this, and that's why I got cancer'..." while ME says "This was of my own doing, and I take responsibility..."

Well, which is it?

And this business of turning on or off your BRCA gene mutation....WHAT????? Genes can be turned on and off? Like a light switch? Or an organic veggie grinding smoothie machine?

And making sure you remain in a Zen-state will keep cancer from cropping up or coming back? Really?

"And if "beating it" were as simple as only eating organic, consuming tons of kale and blueberries, chowing down on lentils while burning patchouli incense and singing "Kum Ba Yah" around a fire pit, then surely info on this would take bc treatment more that way, oncologists would prescribe it & proclaim the elusive cure has been found, and no more with the "slash / poison / burn" treatment.  Ya know?" ~LunaTechChick

And yes, early detection is essential, but it's not a cure. Yes, a mammogram can find cancer, but it can also find other, weirdo, non life threatening things in there, too...and the mammo itself isn't what saved your life, if you actually DO beat bc...which leads back to the whole 30% discussion...

Near the end of the article, they say their bc was "a gift".  I know some others who feel that way too.  I am not one of those people.  I'm still so damn pissed off that it happened to me in the first place. And that's another rant for another time....

What's not shown on the the photo, but is talked about in the article is the fact that they both did use some tried and true MEDICAL TREATMENTS.  Surgery, ME did chemo.  THAT is what helped y'all "beat cancer".  If...

Anyway...my two cents....celebrities' voices are powerful.  Their words and actions carry so much weight with their fans. I think they have a responsibility to be careful how they "do" their cancer when they do it in the public eye. It just bothers me when, a celebrity cancer person starts speaking publicly like they are some sort of medical professional, or are now the expert on cancer prevention/treatment/cure.

Y'all are singers, actors, and entertainers.  Not medical doctors.  What works and is right for you is not necessarily right for someone else.

Posted by LunaTechChick at 7:55 PM 6 comments: