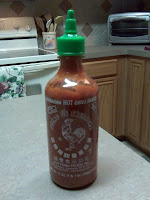 So, we have a new fave Hot Sauce around here.  Sriracha Hot Chili Sauce.  I like to call it "Rooster Sauce".  Last weekend O & I had a fun "Sushi Sunday" at our favorite mall, Northpark. Sushi Sunday is when you pop up to the mall, run in the Kona Grill, grab a few sushi rolls & then catch a movie at the mall's nice theater.  So we usually order: Crab Crunch, Philadelphia Roll & California Roll.  The waiter told us we should try this hot sauce with our sushi.  And he also brought extra Eel Sauce.  But anyway....I'm like, "Eh...whatever" when it comes to California Roll.  You know...like it's not really "all that".  Until you put Rooster Sauce on it.  HFS!  And then the waiter is all tellin us all the different ways he uses it.  And since then, we got some & O is putting it on EVERYTHING.  (Great on a burger & to dip fries in, BTW.)
I'm going to attempt a recipe for deviled eggs with it.  Check THIS out:
Kalyn's Sriracha Deviled Eggs   Perfect for Easter weekend, right!  Also was told that if you mix it with ketchup, it's great to give some kick to a hot dog.  Mmmmmmm! If it's HOT & spicy.  We like it. 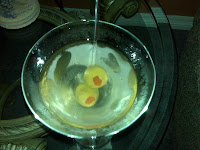 And we also like some cold stuff too.  Especially if you've had a "Monday" kinda Monday...or a "Monday" kinda Wednesday....or a "Monday" kinda *insert day/time/event here*  The cure for the "Monday's"?  Sometimes nothin but a nice martini will do! I shake up one awesome tastin Vodka Martini.  I like mine just slightly dirty...O likes his "regular" dirty.  Just grab those martini glasses outta the freezer, shake up some of the "good" vodka (I prefer Grey Goose), & chill the eff out. Ya know what I always say: "It's 5 o'clock somewhere!"

Enjoying a nice 3 day weekend around here.  And hopin next week doesn't have too many "Mondays".  Know what I mean?  And there are things going on, that I just cannot blog about right now.  But suffice it to say, we're all Hot & Cold about all of it.
Posted by LunaTechChick at 10:57 AM No comments:

Email ThisBlogThis!Share to TwitterShare to FacebookShare to Pinterest
Labels: blog that has nothing to do with cancer, hot and cold, hot sauce, martini, rooster sauce, Sriracha

Yep.  That's how it was for me. I just found him. (People who know me are, right about now thinkin, "aww jeez, more flailing & fainting about that Craig Ferguson!" Yep. You betcha!)  ANYWAY, I'm FINALLY going to get to see him LIVE...  He's FINALLY comin *to my region*! #NotLikeThat! (Or #ExactlyLikeThat? LOL) No flags will pop on, no "whassacominago", or "oooh la la" or anything.  And I'm probably more excited about it than anyone else who will also be in attendance.  Why? Why would I be the most excited?  I imagine it would have to do with the how & when I discovered @CraigyFerg.  Better known as Craig Ferguson, to those who don't do the Tweety. (Twitter).

It was in 2009.  Late summer.  I had been diagnosed with Stage III breast cancer at the end of June, just a couple weeks past my 40th birthday.  I think it might actually have been after my first round of chemo.  I think I still had my hair.  It was the darkest period of my life.  I had become so depressed.  Cried a lot.  Wondered what kind of life will I have from this point on?  Things will NEVER be the same.  Will I EVER smile again?? Would I ever laugh again??  Because I hadn't done any of those things in quite some time.

It was late at night for me for a weeknight.  I couldn't sleep.  I was just going over & over in my mind about this terrible turn life had taken for me & my husband.  (Who, BTW, has been & continues to be AWESOME & also played the BIGGEST role in gettin me through "cancer-hell", as well as my friends & family too...but this is my "Craig-story.") Anyway, so I turned on the TV.  Flippin through the channels, I stopped on one because I just HAD to see WTF was going on with puppets on CBS around 11:30ish.  I so wish I could remember exactly what episode it was. But I do believe it was something with the puppets.  And the next thing I knew, half an hour had gone by.  And I had been smiling & laughing the entire time.  Real laughter.  Which I hadn't done in what felt like ages.  And it felt good to smile.  Felt good to easily & naturally laugh.

Soooooo, I made it a habit to "stay up late" & watch The Late Late Show with Craig Ferguson.  A guaranteed smile/laugh-fest daily.  And it was at that point that I think I turned a corner.  It's weird, but I do believe I rejoined the land of the living after that.  Was able to get together with friends & actually enjoy life again.  And realize that it's going to be ok.

So.  Is Craig the cure for cancer?  No.  But for me, he definitely played a big role in my recovery from cancer treatment.  I even got to contribute to a music video that was (awesomely) made as a gift for Craig's birthday, by another of his devoted fans.   (Craig fans are also known as the "Robot Skeleton Army", or "RSA" #RSA on Twitter).   I even wrote to the show because I just wanted to let Craig know how much I appreciate what he does, what a difference he's made in my life (& so many others, I've come to learn), & that somewhere out there, there's a cancer patient who "stays up late" to get her daily dose of #Craigy - induced laughter.

And I still do.  And now I get to see him LIVE pretty soon.  Some other RSA have been SO lucky to have had the opportunity to actually MEET him.  OMG.  THAT would just be awesome.  To be able to shake his hand & thank him personally for....for being him, I guess.  But, alas, I do not have any VIP pass, or meet n greet creds.  SO.  If you're reading this, & you have pull with CBS, or Craig, or LLS.....This RSA "ain't too proud to beg." LOL.  Seriously, not sure I could even speak if I got to meet him.  So it's probably just as well.  Cause I'd probably just stand there. Speechless. And teary.

So there it is.  The Confessions of a Fourty-Something Fan Girl.

Not That There's Anything Wrong With That.... 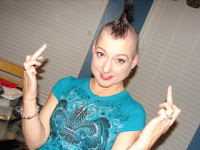 So, yeah.  I'm comin outta the closet! #NotLikeThat! LOL! Comin outta the "cancer closet" on my Facebook.  Yeah, I had posted a Note on there where I directed folks to the CarePage (& now this blog) for all the cancer convo.  Keep Facebook a "happy place".  Well, now that I'm almost 2 years out from the cancer road through Hell, I figured, why NOT share with my Facebook friends? And Twitter friends.  If I'm willing to blog all this out to the world & have total strangers read about it (*waves at faithful readers in the UK*), then why would I not be open about it with people I actually KNOW?  Ya know?  So I went ahead & shared my mohawk pics on there, & made public some photos from my 1st chemo. 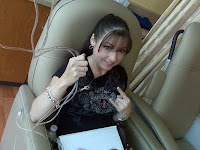 I mean, why NOT be one of those "loud & proud" survivors?! Having had cancer is a PART of who I am now.   The new & improved LunaTechChick. =)

So yeah, I'm officially out of the closet.  Not that there's anything wrong with that. ;)
Posted by LunaTechChick at 5:58 PM No comments: