And I Fall Asleep Counting My Blessings

This Thanksgiving I'm thankful for SO many things. I'm thankful that I live in this era of great technology that includes Facebook (thank you Mark Zuckerberg) & also Skype. These things sure do help to bridge the huge 1000 mile gap between me & my family. And my Georgia friends. I am thankful that I'm married, for my husband, my family, my friends, my AWESOME medical team - surgeon, oncologists, nurses & staff.  Thankful that I have my health....Thankful for every day...Thankful that it only took just under three years to regrow my hair back into something that looks like ME. Thankful that all our basic needs are met.

Email ThisBlogThis!Share to TwitterShare to FacebookShare to Pinterest
Labels: Thanksgiving

What Are Words For...

When no one listens any more....

Until I drop the F-Bomb anyway.  Jeez.  Lately I've been seeing some people giving other people shit about their use of dirty words.  One lady is even saying that she's gonna unfriend anybody on Facebook who uses the F-Bomb in a status update.

*Braces self for the fuckin' unfriending*

Ok, here's the deal.  I cuss.  I cuss a lot.  And the word fuck is among my favorite words.  I also have learned some new cusses from a friend on facebook....here's one - twatwaffle.  In a sentance: Donald Trump is an utter & complete twatwaffle.  I fuckin love that! LOL!

Anyway....just had to put it on out there.  I cuss.  I'm mindful not to do it when around children & also when in the company of people I know would be offended.


Posted by LunaTechChick at 1:03 PM No comments:

Email ThisBlogThis!Share to TwitterShare to FacebookShare to Pinterest
Labels: blog that has nothing to do with cancer

Good lord. Hostess is goin out of business.  And people are totally freakin the fuck out.  They're all like, WHAT???!!! No more Twinkies? Zingers? Wonder Bread? OMGOMGOMG!!!!!

I had to be the one to break the news to O.

Me: So this explains why you couldn't find Zingers in the store yesterday.
O: What?
Me: Hostess is shutting down.
O: Bullshit.  No they're not.
Me: Showin him the CNN article...Yes. They are.  Check it.
O: OH. MY. God. I canNOT believe this. *his voice growin frantic* So this is gonna be the end of Twinkies, Zingers, Ho Ho's, the Cupcakes with the curly deal on top?  This is just terrible.  It's an absolute TRAVESTY!!!!!!
Me: *runnin to the sink as I try to stop coffee from spewin out my nose*

And just as two states have legalized marijuana....Oh the irony! LOL!  And as the "End of the World" is approachin next month.  Well played Mayans.

Ok people....I seriously doubt this is the END OF THE TWINKIE.  I'm quite certain another brand will pick it up & carry on.  So yeah, let's remember the "sage advice of the lemur".
Posted by LunaTechChick at 1:08 PM 4 comments:

Email ThisBlogThis!Share to TwitterShare to FacebookShare to Pinterest
Labels: blog that has nothing to do with cancer, food, Hostess, Twinkie

Is the root of all evil Tooooodaaaay.

Yep.  We fell victim to a piece of shit, bottom feedin, thievin asshole.  Apparently my debit card was swiped on a machine that had a skimmer on it.  Luckily, thanks to the Text Notification service provided by our bank, we were able to report the fraudulent activity & shut down the transaction immediately.  It went down like this:

Sittin in a restaurant, orderin what turned out to be some of the worst food we've ever been served (yes, the food drama continues...but that's another post for another time....).

Twohundred dollars worth of shoes at Payless is a bunch of damn shoes.  And this person thought themselves to be oh so clever.  Ordered the shoes online...charged came out of Kansas....was set to ship for pickup at a store in New York.  But the charge never made it past the Authorization process & was never even posted.  So, take that, dumbass-theivin-assface!

This, among SO many other things, we are thankful for.

But that was just one of a bit of a flurry of bad luck stuff we had to deal with in the last several days.  Started with getting a Notice of Violation from our HOA.  Apparently our fence must be restained.  And, as I type this, O is outside stainin the fence.  Later that day, our engine light in the truck came on.  We're all like, REALLY?! Must be Mercury Retrograde....Yep...it sure is.

And then there was the frantic day where O was on a day long shoot & shit started hittin the fan with a project we're hopin is gonna be a VERY good thing for us & our wresting show people.  Again, another post, for another time.

What else....Thanksgiving is approaching.  Turkey anxiety has been handled.  I have a lovely 15 pound bird in the fridge.  Now to deal with the squash anxiety....will handle that tomorrow.

﻿ And finally....hair regrowth update time....Two years & eleven months of hair growin has resulted in this:

Thanks everyone for readin, commentin & subscribin to my blog.  O recently made me a lovely Facebook Fan page.  Check me out! https://www.facebook.com/#!/LunaTechChick2009
Hey, please go on & Like on it...I figure, this is the perfect way to keep up with the blog, without havin to Follow or Subscribe.  I understand how some folks are hesitant to put their email address in the little box up there.

Thanks so much! xx
Posted by LunaTechChick at 12:52 PM 2 comments:

You Say You Want A Revolution....

Sorry Mr Trump.  You are quite mistaken.  Now that all the votes are counted, President Obama did win the popular vote.

I'm glad the election is over.  And I was right.  There's no end in sight to all the arguing & threats to defect to Canada & all the other bullshit.  In some cases it's even worse now than before.
Look.  The POTUS all by himself doesn't make stuff happen.  Ok?  Can we all please now just accept that the American people have made their choice & let's work together & support?

Posted by LunaTechChick at 1:15 PM No comments:

Email ThisBlogThis!Share to TwitterShare to FacebookShare to Pinterest
Labels: blog that has nothing to do with cancer, POTUS

It's The Final Countdown... 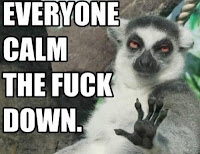 Election 2012 is in the final hours.  We're gonna know who will be the next POTUS this week.  And either way it goes, I have a feeling it won't be the end of the utter & complete bullshit I'm seeing all over the intergoogles. And we're seeing our freinds, family, other people we know, or thought we knew, in a whole different light. Thanks to social media like Facebook & Twitter, we are learning so much more about each other. Especially in the last few months of this Election Year.  I'm hearing of people unfriending people on Facebook cause they post political views & opinions that differ from theirs.  Blockin people on Twitter.  Gettin into all out Facebook fights.  There was even a story on CNN about it. 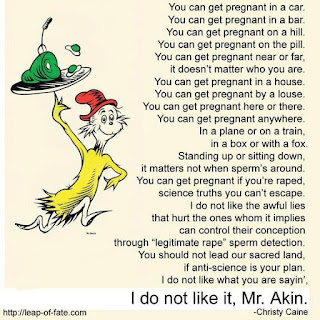 And is somebody else's Facebook Profile Page really the place to have your Political Rant/Tantrum? Most of the time I will refrain from posting anything on my Facebook or Twitter that indicates which way I lean politically.  I also don't get into religious discussions on social media.  Occasionally I will share a humorous post or picture that has to do with politics.  But it's because I think it's funny.  Like this humorous riff on Dr Seuss' Green Eggs & Ham.  Or these others that I'm sure both candidates would find pretty damn funny. 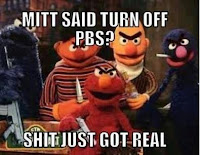 So let's stop with all the asshattery.  Let's use a little social media etiquette, shall we?  I will not delete anyone from my Facebook over political posts (on my page or their own)...or religious posts...or foul language...(I mean, why the fuck would I fuckin do that?) That's just not my way. I'll just come over here & bitch blog about it.  Cool?
*steps down off soapbox*
﻿

﻿﻿﻿
Ok, so hope everyone had a Happy Halloween! We went to have some fajitas & then came home & handed out candy.  I did not dress up, but did wear a hat.  ﻿

﻿And here we are in November.  Time for the annual "turkey anxiety". =)
Posted by LunaTechChick at 4:49 PM 6 comments: