And I ain't talkin bout yer love either. But what I AM talkin bout is the fact that I am now officially DONE with taking Tamoxifen.  My bc was ER- / PR WEAKLY + at only 9%.  Pretty sure the HER2+ was the thing with mine.  I took the Tamoxifen for just over 2 years. (Normal course of treatment with Tamoxifen is 5 years.) In the last several months it has made me a complete basket case, paranoid freak. (Ok, more so than I already am.) And it also was affecting other stuff too, physically, not just makin me totally fucked up in the head. (Again, even more so...lol) I mean, I was havin all kinds of weirdo symptoms "count em 1 - 2 - 3" ...*throws the "horns" in the air, bangs head & slings hair around*

I'm also pretty sure that my Onc, Dr W, now dreads havin to deal with me after the way the last appointment went.  But in that last appointment he made "an executive decision" to have me stop the Tamoxifen for 30 days & then check back in with him.  So I did, & Dr W, through his nurse B, said it was OK for me to stop the Tamoxifen permanently.  I realize that it will probably take a bit longer for all the Tamoxifen to get out of my system, but I can definitely tell I'm more my old self lately. 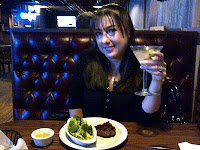 So that's it.  O & I decided to celebrate.  Went to my favorite steak joint, but they've changed the way they prepare the steaks, so it is no longer my favorite steak place.  O had a lovely chicken fried steak that was very good.  My little sirloin? NotSoMuch.  But O & I split a wonderful Grey Goose martini ("shake it up..." lol) & toasted to the official end of all treatments & gettin on with life....& the fact that Halloween is in just a few days!!!

Can ya tell we love Halloween?

So we were just hangin out on the sofa, watchin TV & the stuff on the fireplace mantle started shaking & the sofa itself just suddenly moved. Like a jolting kinda sudden movement.  And I thought, damn, what the fuck was that?

He was very into the TV at the moment.  I thought to myself, wonder if that was an earthquake?  Should have said it out loud, cause about an hour later O says while lookin at his BlackBerry, "Yep, says here Channel 8 said we just had an earthquake!"  I was all like "I KNEW IT! I Totally knew that was an earthquake!!"  It was small, 2.7, but still...was totally freaky! 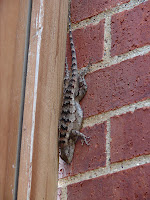 Another freaky thing happend last week.  Our little friend Godzilla is back! He's gotten bigger! And he didn't mind us gettin up close & personal...O took a bunch of pictures of him & some video too.

So that's about it for now....Just pretty much wanted to tell y'all we felt an earthquake & had a visit from our little friend Godzilla.

And lookin forward to Halloween.

Posted by LunaTechChick at 10:11 PM 2 comments:

Email ThisBlogThis!Share to TwitterShare to FacebookShare to Pinterest
Labels: blog that has nothing to do with cancer

For the last 10 years I've had a salivary gland stone.  More specifically, I was told it was a 4mm calcium deposit in the submandibular salivary gland. (The cause of these stones is unknown...could be from takin my allergy meds, or blood pressure meds, or just the result of "dry mouth".)  And at that time, the only remedy was surgery, or just use lemon drops or other things to stimulate saliva.  Occasionally it would cause the gland to become infected...about once every couple of years.  So then you take antibiotics.  And I had such an infection a couple of weeks ago.  And I was really sick & tired of dealing with it.  So I did some Google-in & learned there is a newish procedure called Sialendoscopy...they go in through the opening of the gland duct with a tiny scope thing & pull the stone out.  Great!  So I made an appointment with an ENT doc.  Of course a new patient tryin to see a specialist is gonna wait at least a couple of weeks to get an appointment.  But I was cool with that.  I've been dealin with this shit for 10 years, was already on the antibiotics...what's another couple of weeks, right?

But this time on the antibiotics was different from all the other times....I started seein this white lump under my tongue.  And then after a couple of more days, the lump became scratchy feelin.  Of course I jack with it.  Try to scratch it off with my fingernail...nope.  So I take my dental pickin tool thingy & try to scrape it off & when I drag it across the white lump, it sounds like I'm scratchin on a fuckin rock.  So I Google again...At this point I've got myself absolutely convinced I've got some sort of fuckin mouth cancer or leukoplakia goin on...all my years of smokin (quit 9 years ago) & drinkin (don't ask) have finally caught up to me & now I've got fucking mouth cancer.  Great.  Finished the 10 day course of antibiotics.  Still have a week to go before I can see the ENT guy.  So I pop in to my regular PCP's office & see the Nurse Practicioner there.  Show it to her, tell her my history of the pain in my ass (er, mouth) salivary gland stone, & ask her could this be the stone itself tryin to pass through the duct? She was all like:

"No...absolutely not.  That's not what this is.  I don't know what this is.  Some sort of keratinized horn.  But not leukoplakia...definitely not that."
Me: "Ok, can you say it's also definitely not mouth cancer?"
Her: "No, I can't say that either, but from the way you say it just appeared, it doesn't sound like cancer, which doesn't just 'pop up', but grows over time."

So we left & I felt reasonably sure I wasn't dying of anything.  Shit, I just had my physical 2 weeks ago & was given a clean bill of health! *takes a bow* =)

But the damned white lump under my tongue just seemed to get larger & scratchier.  And then I did more Google-in & saw pictures of salivary stones actually passing through the ducts & coming out.  And then I was totally convinced that this is what I was dealing with.  *shakes fist at Nurse Practitioner*

O looked at the Google pics, looked at the lump under my tongue & agreed.  He was sayin to just sterilize some tweezers, grab that fucker & pull it out! But I was too scared.  What if it flared out at the bottom, or was pyramid shaped? I don't wanna rip a big ass hole in my mouth & bleed like crazy!  Then O recommended I swish my mouth with Listerine.  So I did that.  And then it started happenin.  The gland started swelling...started having pain at the white lump under the tongue place.  And then the stone pretty much shot right out of my salivary gland duct.  I literally plucked it out with my fingernail.

Absolutely freaky fuckin shit.  And ever since....I can see that my issues with this are a thing of the past.  The floor of my mouth hasn't felt so happy & lovely in years.


Posted by LunaTechChick at 7:56 PM 4 comments:

PINK. Yes it's that time again.  Breast Cancer Awareness month. And every year I feel differently about all the pinkness goin on.   I waffle back & forth on the whole Pink issue. I know some bc ladies who absolutely hate the pink ribbon....almost militant about it. I display it here & there mostly as a symbol of solidarity & so others will recognize that I, too, have been there. And then I know some ladies who absolutely flank themselves in pink & pink ribbon stuff....I recently watched the Documentary "Pink Ribbons, Inc" & it was just ok. Didn't really point out anything that we all probably didn't already know. Which is that lots of companies have jumped on the "Pink Ribbon Bandwagon" & plaster it on their products to boost sales while only donating a teeny tiny portion to bc research. And some of these companies manufacture products that have known carcinogens in them...even in some Pink Ribbon labeled stuff.  So I just ask my friends & family to "think before you pink". Look at the product's packaging & make sure it at least tells you WHERE money is being sent & if it tells you an amount or percentage, even better. I trip out every year on stuff they put the ribbon on. This year's trip out?  Pink Ribbon Pasta.  Check it out. 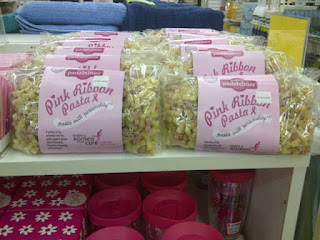 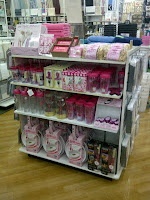 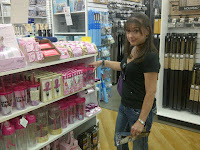 Yes, pretty much everywhere, everything is awash with the shade of Pepto Bismol.  You can't escape it.  So I just don't see the point in spending energy on gettin all bent about seein it everywhere.  For instance....when you're newly diagnosed, doesn't it seem like friends & family all start sportin the pink ribbon, givin you pink ribbon gifts, etc?  I heard a story of a nice teacher lady who was diagnosed...& all her students started wearin pink ribbons to support her.  I don't think she's a fan of the ribbon, but really....all people are tryin to say by doin that is that they love you & want to support you.  I just don't get those who respond with "I got yer awareness RIGHT HERE!!" while pointin to their breasts, or mastectomy sites....eh, I dunno.....how about just feel happy that people want to show they care about you & what you're goin through?

And while I'm on my soapbox....I'm learnin that some people take offense to being called a Survivor.  Why?  I get that not everyone survives it.  But what else are we supposed to call ourselves?  "People with a bc diagnosis" I guess.  Just seems easier to say "Survivor".

Now here's one thing that I DO agree about.  I don't like to say that I've "battled bc".  Rather, it battle ME.  Or that I've "fought" bc.  I didn't fight.  I just showed up.  I needed surgery.  I showed up.  Needed Chemo, showed up.  Needed Radiation.....you get the picture.  But, while I don't like the expression, I'm not gonna get all pissed off about someone sayin about how I "battled" or "fought" bc. But the one I absolutely HATE the most....when you hear that someone "lost their battle"...to me this implies that they did something wrong, or weren't tough enough....which is just wrong.  I say, those are the ones "taken" by this fucked up disease.

Eh, so I guess as time goes on, I realize....that while I do have my own opinions of stuff....at this point, deep down....I really don't give a shit about most of this "small stuff".  ﻿