Aside from still being pretty pissed off that I had to have cancer to begin with, having to be reminded of it due to the lingering side effects just pisses me right off even more. While some of the side effects might be thought of as vanity issues, (which they aren't), others are actual, physical reminders of what happened.

Even at 7 years out, I am still dealing with the fallout. And I'm not just talking about PTSD either, of which I have a'plenty. God forbid I ever have a headache...or ANY ache or pain...or pimple. But things like, a weak left arm and mild case of lymphedema, thanks to lymph node removal surgery. The itch I feel from time to time that can't ever be scratched because there is still numbness in the back of my arm.

Early menopause and ALL the issues that come with that. Skin changes, weight gain and difficulty in losing weight...sexual things....gawd!

Chemo-brain. I haz it. Still. Some better, but still have foggy days. Also, the fear of the potential for damage to the heart from having had treatment with Herceptin...and also Radiation on my left side. So I am now a cardio freak. If I can't get in a certain number of days a week of my cardio, I get so aggravated and paranoid.

Some of my fingernails still have a blue tint to the nail beds. And one has a permanent dark stripe down it that developed and was much darker during chemo. And my nails are some weaker. 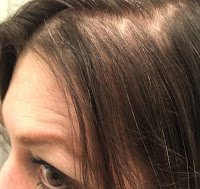 And still, hair issues. My eyebrows and eyelashes like to come and go. Some leg hair never came back (which that one is fine with me). And now, it appears the hair on my head is thinning. Hormone issues? Or just the life cycle of a hair follicle? Since most of it fell out at the same time.... Eh, it's whatever. Any day with hair is a good day. But damn it's getting thin. I think... It just seems like I'm experiencing an increase in the fallout. Like there's constantly a hair tickling me on my leg or down my shirt or something. And now I'm looking at it all the time trying to figure out if it's thin.

And OMG now I'm hearing about some class action lawsuit against the Taxotere people...that it is possible for the hair loss to be permanent...and the doctors aren't telling the patients this? Something like that....OMG! Just...OH EM GEE!!!! And now, since I think I'm thinning, I'm all paranoid that this might be a delayed long term effect...and I might be headed back to baldness.....

Anyway.....were you warned about the long term side effects that could linger long after treatment was over? I probably was, but I sure don't remember.

You Shut Your Mouth, How Can You Say....

Man people can just be so insensitive. And I do understand that it's mostly not intentional. And I don't want this to be another one of those "stupid shit people say to cancer patients" type of post. Kinda already did one of those last year.

Rather, I think what's on my mind is the fact that, after my diagnosis, all throughout my treatment process, and even still today...people are still telling me how I should think and feel, and telling me what to do.

And it's getting on my nerves. But then again, not much doesn't get on my nerves these days, as it seems I've been in a bad mood for weeks and weeks now.

Maybe it's because of the anxiety inducing time of the year...when I was thrown into cancerland. The diagnosis, the surgeries, the chemo kicking off....the hair loss devastation.

And I still can't believe it's been 7 years now.

Anyway...I guess I just need people to know that, even though you are trying to be helpful, you achieve the exact opposite result when you say something like "Well, at least your cancer is not one of the worst ones..." or something like that. Ya know?

Or "How can you still be so upset when you know you are 'cancer free'?" said to me exactly 3 1/2 weeks after being diagnosed.

Or "Omg, stop using this chemo-brain excuse...you just want to get out of xyz task/chore/appointment". (Here are 10 Things y'all should know about chemo-brain.)

"There are so many others so much worse off than you." 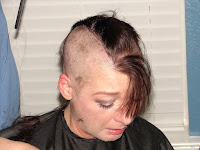 "Your hair will grow back. My teeth are all gone. I'm bald inside my mouth!" (Seriously.)

"You shouldn't be worried about anything ever again cause you've faced the worst thing ever...cancer and death!" - I get this one anytime I complain out loud about life's regular and mundane situations...like finances, or even bitch that I'm getting a pimple. Like, I'm not allowed to let anything ruffle my feathers ever again, cause I've "survived" so much worse.

Just stop it! It's like you are being completely dismissive of my fears, feelings and emotions. Like I have no business having the feelings or emotions that I have.

I guess I'm just saying...think first. Think about something horrible that you've gone through. How would you like it if I played it down like "it could be worse..." Or "at least you didn't/don't...."?

I know so many others have written much more eloquently on this topic. But it's just been in my craw lately. Again, probably the time of year.

And also...can I just say that breast cancer, and any cancer, is not a competition illness. I've compared this type of stupidity to "the labor story". You know...where moms sit around one upping each other on how terrible their labor was. "Oh you were in labor for 19 hours? Oh please...I was in labor for 37 hours and was still having to wait on DH hand and foot and cook his dinner and wash up the dishes before we could go on to the hospital...." *being facetious, of course*

If I share something with you about how I'm feeling or doing (know that you are close enough to me for me to be honest with you, cause most people will only hear that "I'm great, how are you...") and you are about to respond to me with something that begins with the words "At least...." just pause a moment....and then just shut your mouth.

July 23 is the date I mark as my "NEDaversary". It was on that day, in 2009, that I had that second surgery and the clear margin was achieved. And I'm told by some cancerland dwellers that this isn't the correct way to determine your actual NED.... That I'm supposed to consider myself a "survivor" from the moment I was diagnosed. And that I'm really not supposed to say I'm NED until the end of active treatment.

I go about things the wrong way....

And would ya look at that...it ended up being another "stupid shit people say to cancer patients" post after all.....

Posted by LunaTechChick at 9:34 PM 10 comments: