And Everything Is All Right ....

Soooooooo, gonna try to share some fresh, rambly words. Dunno how interesting they will be but my draft file has like 55 unfinished, re-working & rambling thoughts in it. Bout ready to just shit can the lot.

Any-ol-way.....I had my annual visit with my most awesome oncologist, Dr W last month. (Are y'all shocked that I stayed silent online about that? Yeah, me too.) I was a bit surprised that I actually got to see HIM, rather than his partner, since he called me in February to tell me personally, that he was leaving the practice, and that he will be working with IBM and this Watson Technology in Oncology and cancer Research. (Told ya my oncologist is the bomb!) So I was super thrilled to get the call a week prior to my appointment with the other partner oncologist, inviting me to see my Dr W!!!


And the visit was pretty typical...congrats on his new upcoming position, catch up chitty chat, an exam, declared that I'm still NED....and then he said a few things that kind of caught me off guard. First was an answer to O's question....could the radioactive iodine I had to take in 1997 for my Graves Disease have possibly caused my breast cancer..... And Dr W was like, well, I suppose it might have....it's definitely possible, but the radioactive iodine is mostly taken up into the thyroid, so can't really say yes or no. But maybe.

Ok, it had never even occurred to me that this may have played a role. And no, I'm not getting caught up in the whole "was it something I did/didn't do" blame game thing...not at all.

But then Dr W said something that has made me kind of uncomfortable and it's just been on my mind ever since. He said, basically, given that I'm nearing the 8 year mark, and all the surgeries and treatments I had, plus Herceptin for the full year, and the nature of the type of breast cancer I had, (ER neg / PR weakly 9% pos / HER2 pos) he feels I can pretty much rest assured that I'm "done with this". And that, unless I become symptomatic or feel the need, and as long as I keep doing my mammograms and annual physicals with good blood work results, it is entirely up to me if I wish to continue seeing an oncologist at all. Be it him or anyone else.

O looks at me and is all like "Doesn't that make you feel better?"

Dr W is very, very good and highly regarded in oncology. So I chime in with the typical, "Yeah, but you do still hear of metastasis happening even after 20 or more years of cancer freeness...I mean, I pretty much learn of it happening to someone almost every day! So, I can feel reasonably good, but it would be irresponsible for any doctor to tell a breast cancer patient they are 100% D.O.N.E. Right?"

Dr W agreed, that no, nothing is ever 100%, but he's pretty damn confident.

Even though he is leaving practicing daily, he is apparently still going to be around several times a month. I decided to go ahead and make another appointment for next year, and then if I don't feel the need for it, I'll just cancel it. But I did get a warm fuzzy when he told the schedule chick to put me down for next year, on the Friday with HIM! I know...I am a weirdo about my doctors...every single one of them. Well, except Dr C.... 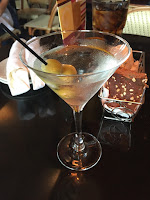 Anyway, yes we did go celebrate with the annual, much over priced Grey Goose Martini with bleu cheese olives. But does Dr W's confidence totally chase away "the fear" I still deal with?

I got that conversation at 7 years and no it didn't stop me from worrying at that moment. I had a lot of anxiety when I went from the biannual checkups to the annual. And then when my oncologist said it was time to cut me loose I thought I would die and nobody cared. It didn't happen and now I understand why he insisted that I would be okay. I needed to get past my "checkup anxiety" and seeing him just reminded me of the whole thing. The last time I saw him I had been cancer free for about 18 years and we went to look at some painting they needed done. I was not only was his patient, we were their house painters from the time of my treatment until we retired. We usually just dealt with his wife but he was there that day, recovering from throat cancer. His wife said he was in the den and wanted to see me. I went in, she closed the door and we hugged and cried. He was a special person and his patients know that. He is still alive and still seeing patients. It's going on 28 years for me and I understand now that I had to move on. I was relying on him and maybe too much alcohol and a few Xanax to get through the days and I had to do that on my own eventually. It's not easy to part company with a doctor who has been your life line for months. You'll know when it's time for you to just stop going.

💗💗💗
I still worry, and always will, sigh. But glad it all went well this year, xoxoxox

Thanks Wendi! Glad for us both! xx

Hi Kimberly,
Very happy to see a new blog post! Yay! More importantly, very happy your latest oncology appointment went well. Kinda nice you got to see your preferred doc. And yeah, about that worry...totally get why it'll always be there. Still, the news was good. Very good. Cheers to that, for sure. xo

First, congratulations on having a good appt. with your Onco! I've never been told I am done. I am over 6 years out now and continue to see my Onco 2x a year, plus a nurse 2x a year. I have to say that I prefer to see my oncologist than all these different doctors. Seeing so many doctors makes me feel like I'll never be partially done with this. My onco was ready to stop seeing me at one point and I said, hells no! And BTW, I still see my radiation oncologist. And to me, that's even weirder. I was part of a study (I was given radiation face down) and maybe this is why. Perhaps she is following me up. I thought it would get easier as time passes, but for me, it is more difficult. I never needed therapy during treatments. Survivorship is so hard! Anyway, I'll always worry. But my hope is that we all stay healthy for a long time, even if all we do is worry? xoxo

Hey Nancy! Yeah, I'm trying to post more....But hearing him say he believes I'm "done with this" is just in my craw or something. I dunno...But yes, yay for good news! :)

I'm just like you, Rebecca, in that, the farther out I am, the higher the anxiety. I am pretty sure I'm going to continue to see an oncologist, at least once a year, spaced s
6 months from my annual physical, for the rest of my life. And this way, a medical professional is checking me out every 6 months. I am a complete mental case now, thanks to the PTSD, but don't really have access to therapy at the mo. I used to see a therapist, probably back in 2011...but then she moved to be closer to her family....one of the issues she was helping me deal with was being homesick & longing for my family, plus the PTSD...so then after Christmas break, she herself moves away to be with her family. Ultimate mind fuck for me. Anyway....I never saw my radiation oncologist again after a 6 month follow up after radiation ended. Ah well...Yes, here's to us all remaining NED for a loooooong time. But yeah, this worry isn't going anywhere anytime soon. xx

I am really happy about the good result of your annual check-up, and wish it goes on like this forever!:-)
The anxiety level will never get to 0 I think, but what we have to try to remember is that the 100% is not 100 for anyone, even people who never had it are not 100% guaranteed never to have it. It would be good to learn some mental trick or something to help us chase the fear whenever it tries to come near....

Regarding the type of BC you had, your onc is quite right as far as I know from all stats I have read (and they are A LOT!): TN and HER-2 positive ER-negative have very low, practically non-existent rates of recurrence past 5-6 years.

So, Kimberly, cheers and enjoy your drink!

Thanks so much for letting me know the information you learned about my type of bc. Clearly I just don't research it at all, for fear of freaking myself out.

True, I'll always have some level of anxiety, but not just about bc, but now just about my health in general.

Thanks so much for reading my ramblings.

Love & health to you!
xx