Grease Is The Word...

Ok, so y'all have seen blog after blog about our issues tryin to get something to eat.  Especially when we've had to work late & have to eat out or pick something up.  Well here we go again.  We work with a wrestling show to produce their monthly show for TV (still waiting to be picked up) & DVD.  Sometimes we don't get outta there till after midnight, & at that point, our food options are limited.  So this particular evening we chose Jack In The Box...one of two twenty-four hour drive thru joints between the wrestling show & our house.  Ok, now I do love me some JIB Tacos.  I know they're not "real".  I really don't care what the fuck they are, cause I just totally love em.  Or I did.

Anyway, here is what JIB has on their website to represent their Tacos.  Ok, now I've never ever gotten Tacos from there that look like this.  Ever.  But it's fine, cause they taste awesome.  Until this past weekend.

Ok, so it's late, we're tired.  We're hungry.  I've looooong since learned my lesson about orderin a salad from a fast food place late late at night.  Trust me.  Just don't do it.  So I figured on a breakfast sandwich & a couple of their tacos.  Normally this is just fine.  Now again, I never expect the tacos to look like that picture there on the right.  Yes, they are usually kinda greasy & the filling a bit of an unrecognizeable mesh of some sort of meatish paste with lettuce, cheese & some taco sauce.  And I've totally been fine with that.  Until I got these babies home.  OH. MY. GAWD.  I mean, I've had greasy JIB tacos, but wow. 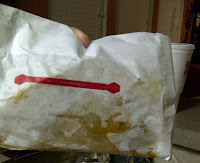 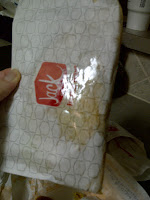 I was nervous before even takin them out of the wrapper.  So we took em out & this is how they looked. 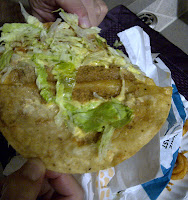 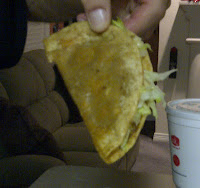 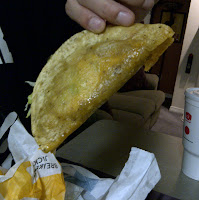 So, just had the breakfast sandwich.  Tossed the tacos, cause I was CERTAIN that if I ate this, I would DEF "toss my tacos" if ya know what I mean.

Ok, abrupt subject change.  For those of you wonderin, where the hell is all the cancer convo?  What's with all this food chat & political ranting?  Well, I'm right smack in the middle of my Oncology appointments, so there's not much doin in the cancer biz these days.  Oh, except for the everlasting paranoia.  I like to call it "The Fear".  It's that thing that now lives in the back of my mind & scares the ever livin shit outta me every time I have the slightest ache or pain.  And GOD FORBID I ever get a headache.  I woke up with one such pain this past Monday.  My right hip was totally hurtin.  Like throbbin, ache, fuckin shit this hurts kinda pain. And my mind is off to the races, thinkin the unthinkable.  But then an NSAID took the pain away, I slept differently in the bed that night, & I'm all good as new again.  Thankfully.  But then, that's the fucked up nature of bc isn't it?  There really is no Remission. So I'm still learnin to live with the New Normal.  How am I doin that?  Well, that's another post, cominatcha Very soon.﻿
Posted by LunaTechChick at 7:29 PM

That taco was too greasy for me even and that is saying a lot. LOL
I still have an occasional moment of panic. I'll have a pain and I think I wonder what's causing that and then I freak. But I promise it will get better. As the years go by you will relax. Don't be too hard on yourself, it hasn't been long enough yet. It's coming.

Thank you Paula! It just sure doesn't help when I hear of others with mets some 5+ years out. Everybody's different. Yeah, that was some nasty tacos. Not sure I can order them again. Not any time soon anyway! xx

Listen, I'm not even going to try to explain the near melt down I had when my neighbor's mother got lung cancer. Because when I talked to her daughter she said it was from her breast cancer 21 years ago. Now, do I believe that? She is a nurse so I figure she got the info right from the Doctors. So I went into near melt down. I'm sure you are familiar with that feeling. LOL It set me back for a while.

Yes. Def familiar. Happens way too frequently for me still. Fuckin bc!

I can't believe you throw those Tacos away, yeah they're taco are very greasy (all the time, i have never got a taco that was actually dry, i will admit), but they are delicious, but you have to eat them immediately, because the grease makes it extremely sagging fast. Also, the taco doesn't really give you the taco bell effect, but then again it depends on the person. :)

Haaaahahaaaa! Thanks so much for commentin! Yeah...was just toooooo much grease. Lol!