A Year With NED & a Couple of Wet Muskrats 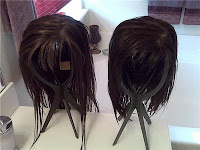 Posted by LunaTechChick at 5:53 PM